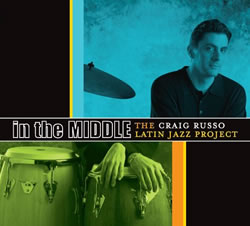 The second production as a leader from drummer/percussionist Craig Russo features said Chicago-based musician and an outstanding cast of players in the middle region of the U.S., performing music from the middle ground of two related but distinct musical cultures, jazz and Afro-Caribbean music.

Logically, the recording is titled In the Middle, yet the music is quite out there, to say the least. A total of ten tracks explore unlimited creative possibilities that fuse Afro-Caribbean rhythms with modern jazz sensibilities and masterful arrangements. Well-know standards get a rhythm lift, including the timeless Bésame Mucho (adapted instrumentally to the Cuban rhythms of the abakuá and guaguancó traditions), while the classic I’m Getting Sentimental Over You is transformed to an upbeat jazz-mambo. The Herbie Hancock composition Butterfly is interpreted to the beat of a Puerto Rican bomba with Cuban jazz-mambo interludes, and Duduka da Fonseca’s score of Doña Maria goes from samba to songo to Latin jazz. In the end, the three original are the tracks that truly stand out in this production: Arrival, A Visit to the Bob, and Chip’s Vision (composed by the group’s pianist, John “Chip” Stephens).

Correction note: Arrival and A Visit to the Bob are composed and arranged by Charles “Chip” McNeill.